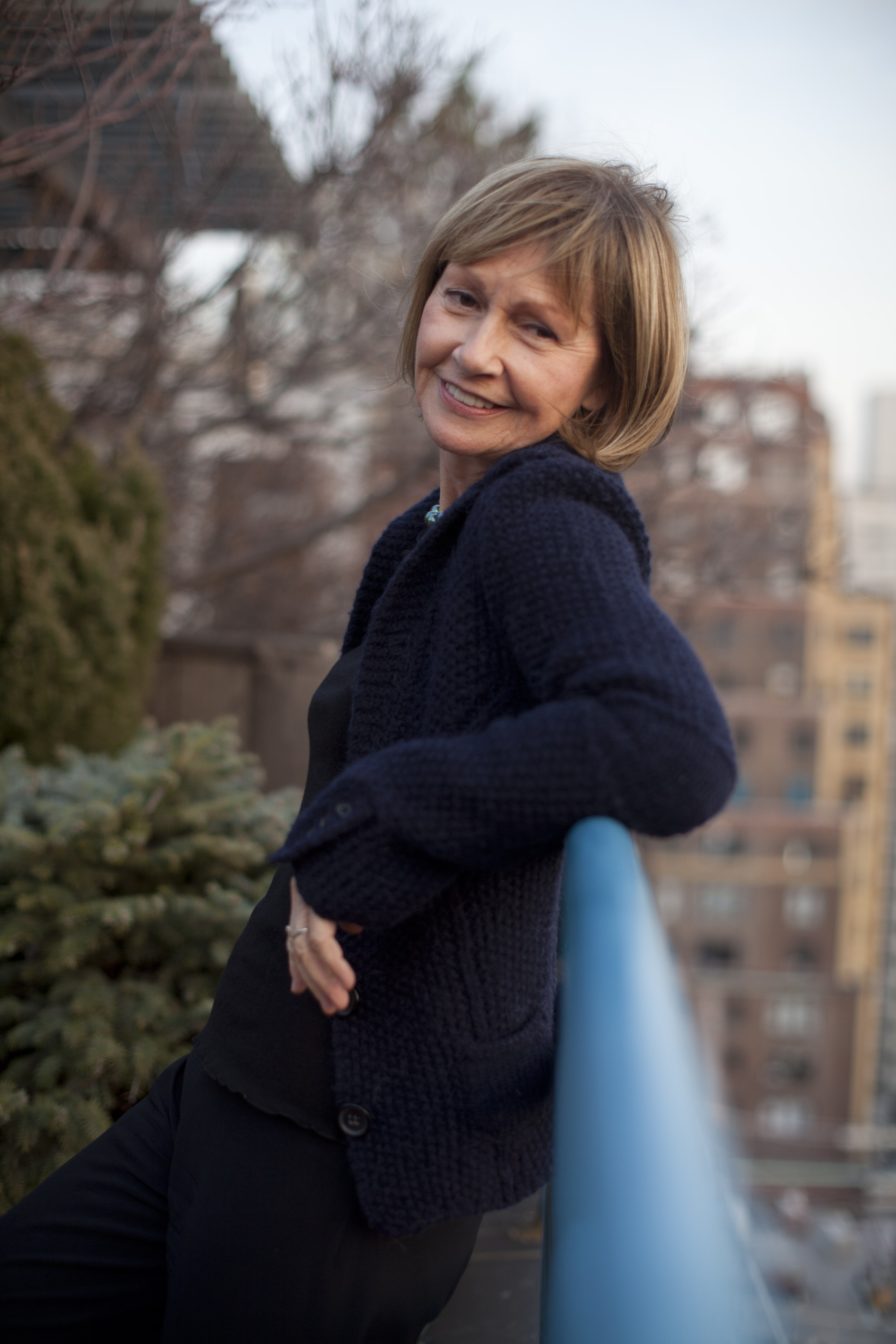 Q. So our French counterparts eat well and live well and don’t get fat in the process. Are you now telling us they don’t get old either?

MG: I wish. Gravity works the same in France as in other countries, but from my writing perch in New York, I see French women approach aging with a different attitude, and that’s what I share in the book, along with some trusted beauty and style tactics French women use to feel attractive and bien dans sa peau as they progress through the decades. It’s not about trying to maintain eternal youth, it’s about taking on a new mindset. I call it “aging with attitude.”

MG: Part of it is looking in the mirror and seeing who you really are and not who you once were or who you think you are, then taking some positive actions to make the second half of your life richer and fuller. It doesn’t take a lot to make a big difference. In the book, I discuss skincare, diet, style, grooming, medical interventions and miracles, exercise, friendship, romance, anti-aging recipes and more. In that sense it is a multifaceted approach with strategies for aging with attitude and joy (not necessarily with surgery) from age 40 onwards. Another part of attitude is what I have come to embrace myself. I have the genes to live a long time, so I want to seize as much as I can of life for as long as I can, and appreciate aging and not try to turn back the clock but perhaps to make it run a bit slower. There is plenty of pleasure in being mature.

MG: French women, on average, are more accepting of aging. Rather than trying to turn back the clock I just mentioned, they want to look good at whatever age they are. Part of it is a benefit of their environment. In France, there is a saying, “life begins at 50,” whereas in the U.S. I have heard women in their 30s complain they are too old. France does not have the same youth-worshipping culture. A woman in her 40s and 50s is still seen as an object of desire, and not because she looks younger. I feel the difference myself when I go to Paris. Men look at me and flirt, and what woman wouldn’t feel a boost of confidence from this? It’s motivation to not “let things go” for sure. There are differences on the beauty front as well. French women are more likely to use a variety of creams and serums to prevent aging, rather than going to plastic surgery as a first step, and they also are less likely to pack on pounds as they age. They know they don’t look 25 anymore, but despite a few wrinkles they can still look and feel good by staying active and engaged and putting in a bit of effort.

Q. Yes, French women do have a reputation for looking good as they age. Consider Juliette Binoche, Isabelle Huppert and Nathalie Baye, just to name a few. Can you share some of their secrets?

MG: I don’t know their personal beauty secrets, but I think a part of it is that they still have thriving careers as desirable women, so they feel the part. French women also take a more subtle approach in their looks. They don’t want to look like they’ve had work done. They have their own tricks, I am sure, but we all do. Being French, I am of the mind that every woman should have a “secret” treatment that provides her with an opportunity to pamper herself and feel more confident about her appearance (for many women, this may be as simple as a homemade beauty mask). I mention Argan oil in the book as something I learned about when I was young and use a drop religiously. It amuses me that now I am beginning to see it as the latest anti-aging beauty ingredient embraced by the cosmetics industry.

Q. What motivated you to write the book?

MG: Might it be that I am getting old? I certainly learned a lot of useful things, mental and physical, in thinking, researching and writing this book over three years that hopefully will add a few more very good years to my life. Like all my books, the prime motivation is to help others. One of the ironies of life is you spend much of it acquiring knowledge and experience, but when you pass on most of it passes on with you. We are not living in our mother’s world, and I wanted to share now what I have gained over a lifetime, mostly in France, but also in America and dozens of countries where I worked and/or visited that could help others. Plus, I could see that many women are struggling with aging, based on the numerous questions I get from women around the world by email or when I give talks. Also, as I suggested, this book was very personal to me. I have the genes to live a great many years, and I want to enjoy it to the fullest. I was not thinking so much about living long, but rather about looking good and feeling healthy in the decades ahead.

Q. How has your life changed since the success of the first book, which is still selling ten years later around the world?

MG: Let me first say I don’t like the word “success” (or “power” for that matter), and those who know me know that I don’t take myself seriously, though I always took my work seriously. The biggest change has been that I have gone from the life of a corporate executive to that of a full-time book author who is ten years older. Now I mostly take summers off (thank you very much). I still try to help and do good things for others, and my core values and my lifestyle have not changed much. It’s not like I suddenly went out and bought myself a lot of jewelry. Expensive jewelry has never been me. I am amused by how easily people who don’t even know me make assumptions and pass judgments. One wonders. I am glad to have more time in my control to devote to my health, pleasures and projects.

Q. We live in a snarky age, and some people lash out against almost anything French, and certainly you get accused of espousing all things French as an ideal over things American or elsewhere. Is there a bit of truth in that?

MG: Ah, yes, I get accused of a lot, mostly by people who I am sure have not read my books. I remember Tina Fey once joking that if you ever felt full of yourself, there’s this thing called the Internet. Amazing what people write. I fell in love with America when I was an exchange student and have chosen to live my life centered in New York. I am certain that during my lifetime America was and is a super great place to live and certainly work. I’d say the greatest place, but that implies a value judgment that cannot be pressed upon all people. Surely some people on a remote island would prefer their home and lifestyle. Ditto many countries. But it is no secret that for the past hundred plus years, more people have wished to emigrate to the U.S. than to any other country. I have been blessed to live in New York and travel throughout America and much of the world; however, that does not negate the fact that French food is pretty good—and here I will say definitely better than in America—or that French women live longer than American women and most others in the world, that’s a fact; or that French women have had centuries of developing tips and tricks and attitudes that embrace aging holistically.

I started the category of French Women lifestyle books, and while imitation is flattering, the whole category now gets bashed. It is a bit tedious. All the so-called Internet critics commenting without having read the book and digressing on all kind of stuff. It shows the frustration and unhappiness out there. The Anglo-Saxon world has long had a love/hate relationship with the French and at least in England a national thirst for gossip. They are having a lot of fun with the past two French presidents. The reality is it is hard to please 100% of the people, so I look at the people who follow me, write me, come to my talks (I like to think they are the 90%) to tell me the difference I’ve made in their lives. That’s very encouraging.

Q. France today is most associated with luxury goods. Louis Vuitton bags and the Veuve Clicquot Champagne you know so well. Food and wine and three-star restaurants and the Rivera and jet-setters. I am sure it is easy to grow old in luxury.

MG: The French are pretty good on vacations and other pleasures, too (wink). You know, my book is not really about facelifts, which is the most expensive “luxury” treatment I cover. It is not where one begins. My book is about the dozens of inexpensive things one can embrace that will “add good years” to your life. As I told the New York Times in a recent interview that I still hear from readers of my first book saying, “I drink more water, take a walk every day and eat yogurt, and my skin and hair are great and I feel so much better.” In that price range, there are dozens of other actions in my book.

Q. What advice would you give a woman who feels depressed about aging and in need of some help?

MG: My first advice, of course, would be to read the book, bien sûr, because it is a much more complete guide than I can provide here. Beyond that, my advice would be to make small changes peu à peu. Assess how you feel mentally, physically and appearance-wise and develop a plan for some manageable adjustments you can make in increments. Also my mother gave me so basic but wise advice: “Be natural, keep your sense of humor, and do whatever it takes to be bien dans sa peau without torturing yourself.”